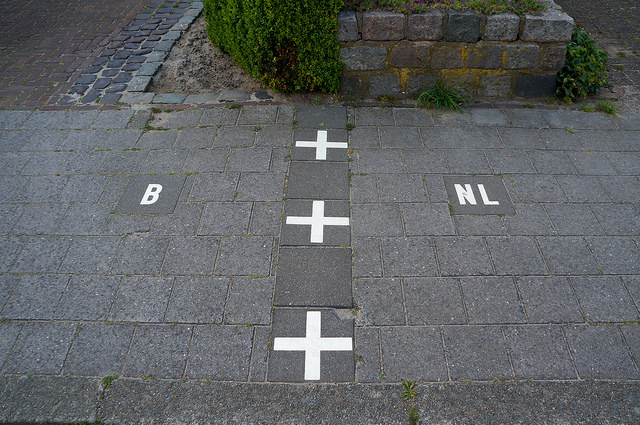 Baarle-Hertog is an enclave, a chunk of Belgium completely surrounded by the Netherlands. The main Dutch-Belgian border lies nearly 5 km to the south of here. 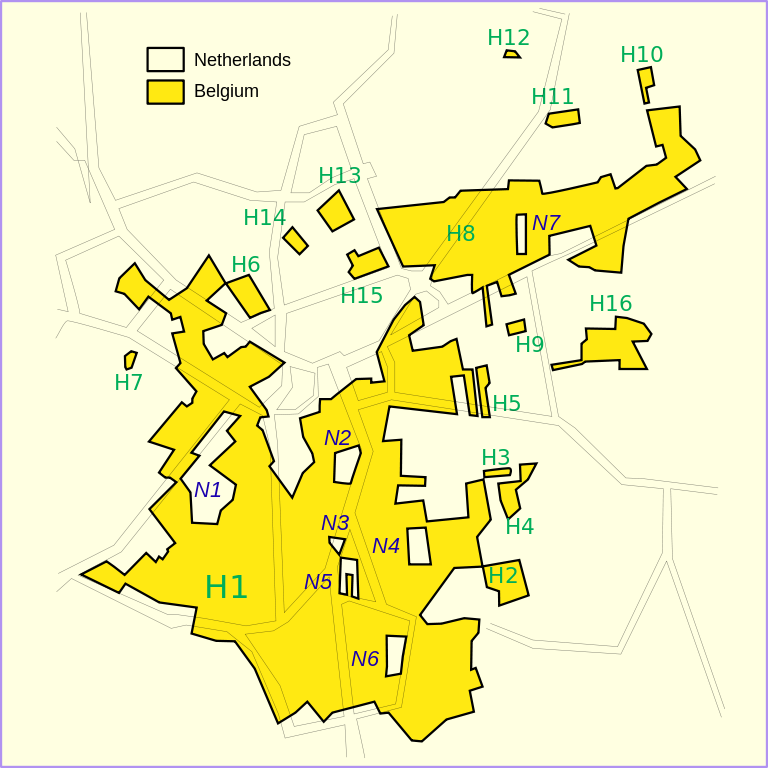 It is one of the world's more complex international borders.

The border cuts through Baarle indiscriminately, crossing streets, dividing roads and slicing through buildings. In the centre it's marked on the pavement as a dashed line, turning into a series of metal discs in the roadway. Elsewhere, such as in fields, industrial estates, and gardens, there is no physical marking. Just the occasional oddity, such as a warehouse with two doors, one each side of the border. 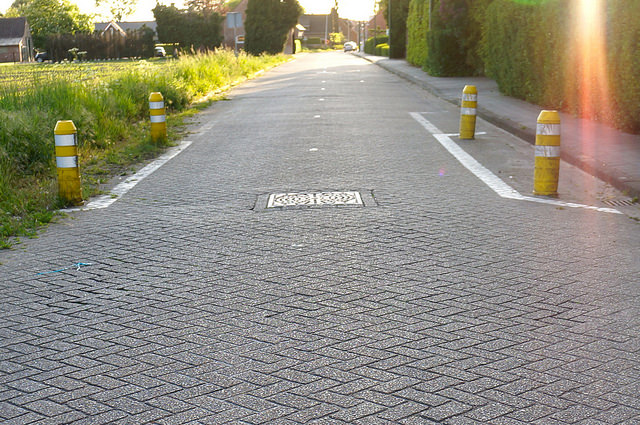 Standing in an industrial estate its surprisingly tricky to work out which country I am in. The border line on Google maps seems unreliable, while in the centre of town it deviates from the one marked on the ground. The map above, from Wikimedia Commons, seems to be the most commonly referred to online, but it was created by an unknown person and doesn't cite the original source of its coordinates. Perhaps I need some kind of "Which Country Am I In Right Now" app. 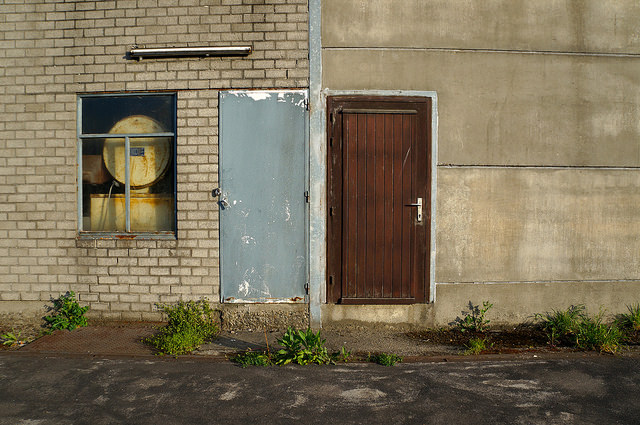 Even homes are bisected by the border, cleaving them into two countries. A flag on the house number indicates which country it is in; its nationality is determined by the location of the front door. Which also decides where taxes are paid. Some houses apparently swap the location of their front doors between countries to benefit from the most favourable taxes, but I couldn't see any buildings where this was obviously the case. 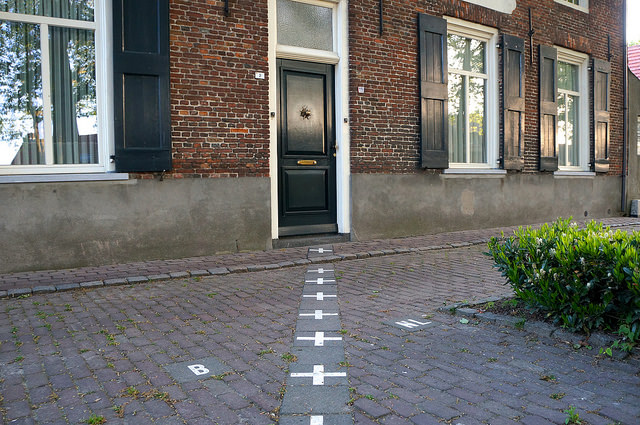 When the border passes through a front door instead the building's interior is divided precisely along the mapped border. A living room might be in Baarle-Hertog with a kitchen in Baarle-Nassau; a family home where children can sleep in different country from their parents. A border-straddling house has two addresses, one in Belgium and the other in the Netherlands. 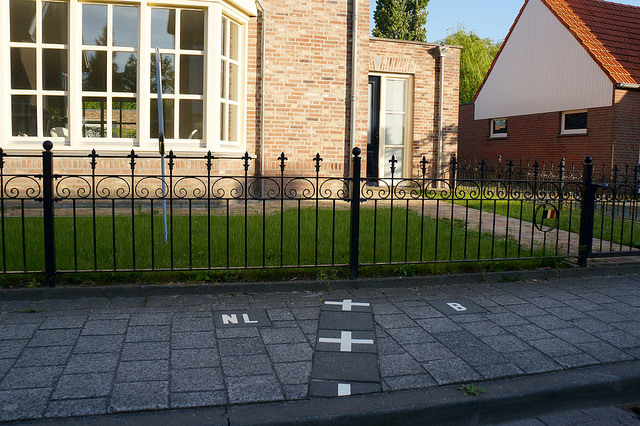 A letter sent from the Belgian half of a house to the Dutch side, posted into a Baarle-Hertog post box would be transported by van to Turnhout, then to Brussels, flown by plane to Amsterdam, then by truck via Tilburg, back to Baarle-Nassau. Apparently. 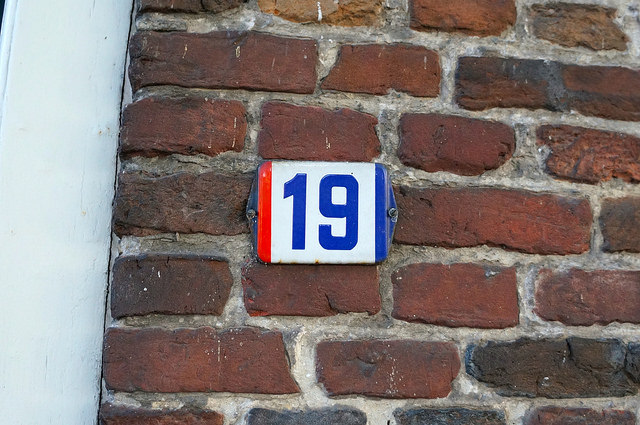 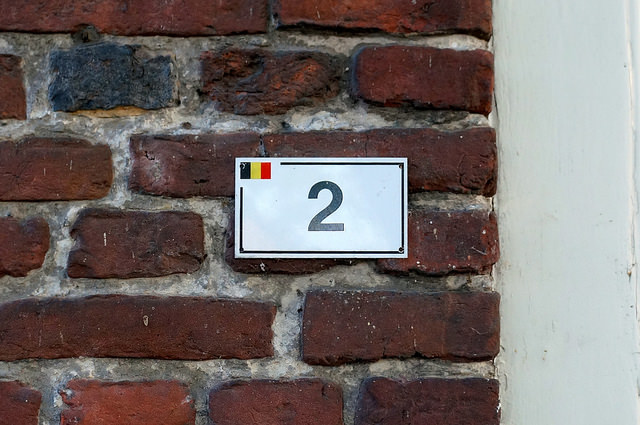 The location of a house decides if it has access to Dutch or Belgian utility companies. Electricity from Eandis in Baarle-Hertog or from TenneT in Baarle-Nassau. Cable TV and internet from Telenet in Hertog, but from a range or providers in Nassau. Telephone service from Belgacom in one, KPN in the other. Even refuse is collected separately for both villages. Some services are shared however, the Dutch companies Brabant and Enexis provide the water and gas supplies respectively in both villages. 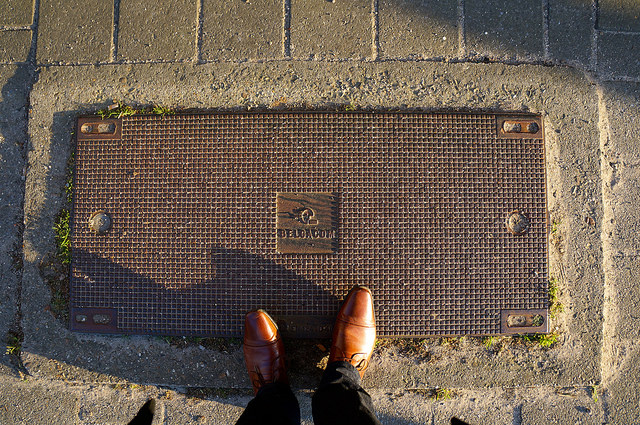 Both Dutch and Belgian mobile phone signals are available throughout Baarle. Radio signals travelling through the air pay no attention to national borders. Though I'm unsure if the Dutch and Belgian phone providers share the same physical cell towers, or if there are separate masts in Baarle-Nassau and Baarle-Hertog. 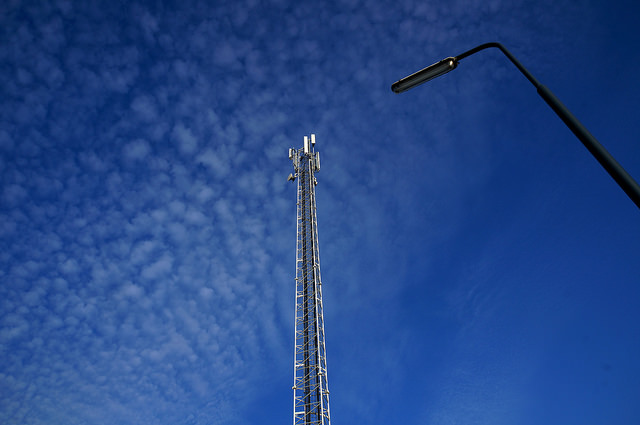 When it comes to infrastructure, this border is less of a solid line and more of a gradient.

I’d heard stories of restaurants and bars straddling the border, with different closing times on each side. At last orders patrons would slide over to the other half of the establishment and carry on drinking. But walking around I couldn’t find a single pub that still straddled the border. 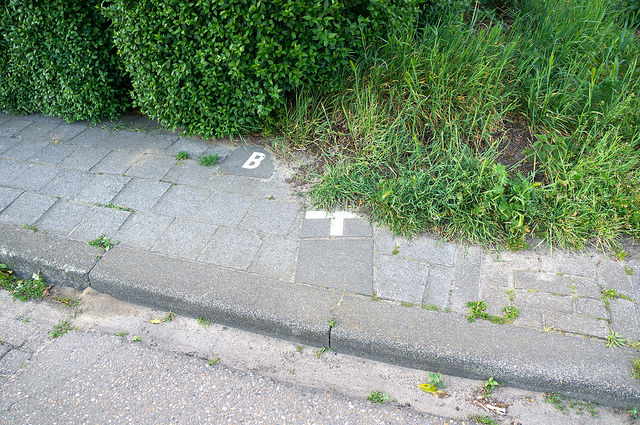 There are fewer hijinks these days, now that we have the EU and various Benelux agreements. The only establishments visibly making the most of the differing regulations are the handful of Belgian firework shops, who unlike the Dutch can sell fireworks all year round.

What struck me when walking around Baarle is how mundane it all was. Sure, jumping back and forth across the dotted line of the border is initially fun but the novelty wares off quickly. The town just works. It’s much like any other European town. There are no checkpoints for example, residents can move freely. The Baarle border doesn't seem to be much of a problem, unlike enclaves elsewhere in the world.

Finding the village’s oddities, the buildings divided in two takes quite a bit of walking around. The border tends to follow roads and go around buildings & gardens. Or rather, the current buildings land were constructed around the border, as the border existed first. Sort of. 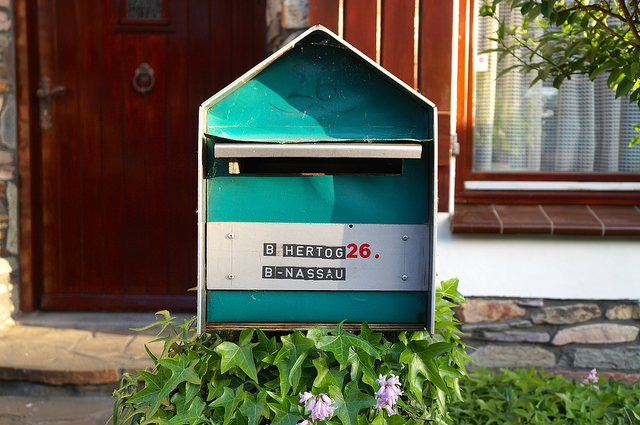 The strange perimeter originates from 1198, the result of a series of diplomatic land swaps between the Lord of Breda and the Duke of Brabant. Quite a normal situation throughout Europe in feudal times. Elsewhere in Europe these parcels were consolidated over the years and borders rationalised, a process that Baarle somehow avoided.

When the present border between the Netherlands and Belgium was drawn up in the Treaty of Maastricht (the 1843 one, not the 1992 remake) the issue of Baarle’s complex border was put aside. A few maps of the area were attached to the treaty for reference, but in the meantime “The status quo shall be maintained both with regard to the villages of Baarle-Nassau (Netherlands) and Baerle-Duc (Belgium) and with regard to the ways crossing them”. Working out the details would be come later.

In 1995, 152 years after the original treaty, the Netherlands and Belgium finally agreed on the position of the border. The agreement doesn’t form a new treaty, as the 1843 treaty remains unfinished with regards to Baarle. It's merely a procès-verbal, a minor addition. And not only did the survey clarify the exact border positions, it finally settled the nationality of enclave H22, a parcel that until then belonged to neither country, increasing the size of Belgium by 2,632 square metres.

This procès-verbal also dispenses with the previous formality of erecting posts to indicate the position of the agreed Dutch-Belgian border. The 959 different points were deemed both too expensive and too impractical to construct. The current markings in the village are purely decorative rather than administrative. Likewise the minutes does not contain the traditional geographic descriptions of the boundary.

Now the official border “has been established in a precise manner in the Belgian and Dutch national coordinate systems”.

But there does not appear to be an online copy of the Dutch version. There is a Belgian copy online, but it does not include the actual table of geographic positions due to ‘technical reasons’. 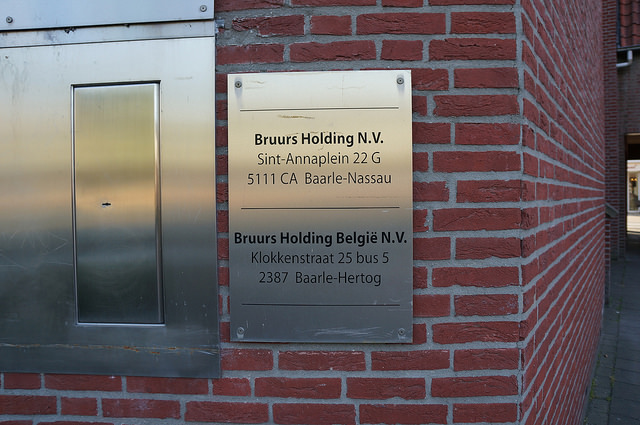 Maybe it doesn’t really matter which country I’m in while wandering around Baarle. The governing municipalities of Baarle-Nassau and Baarle-Hertog work closely together from offices metres apart. They frequently sit in joint sessions, with their decisions binding in both jurisdictions. Today even the two police forces share the same police station.

Which would have been handy back in 1991, when Dutch police searched the premises of a Dutch bank accused of laundering drug trade profits only to find the bank’s premises straddling the border. Featuring a front desk in the Netherlands but a vault in Belgium.

Following the case the bank collapsed, and its premises were converted into a villa. The same address found itself in the news again in 2008, when the body of Katrina Khaniak was discovered hidden in a dumpster there. A surveyor had to determine if she had been found in the Netherlands or Belgium.

Perhaps the seemingly sleepy villages of Baarle-Hertog and Baarle-Nassau should have their own spin-off series of The Bridge. 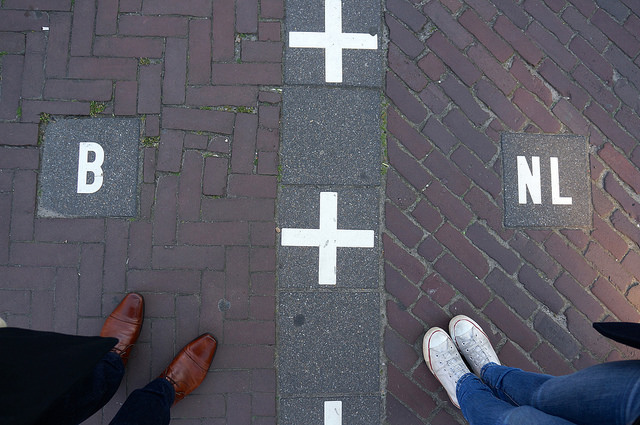 Thanks to @mseckington and @vruba for help finding the text of the Treaty of Maastricht. You might enjoy Kars Alfrink's 2011 dConstruct talk which mentions Baarle and Tom Scott's visit to Baarle. And the post title is blates stolen from China Miéville's The City and The City.